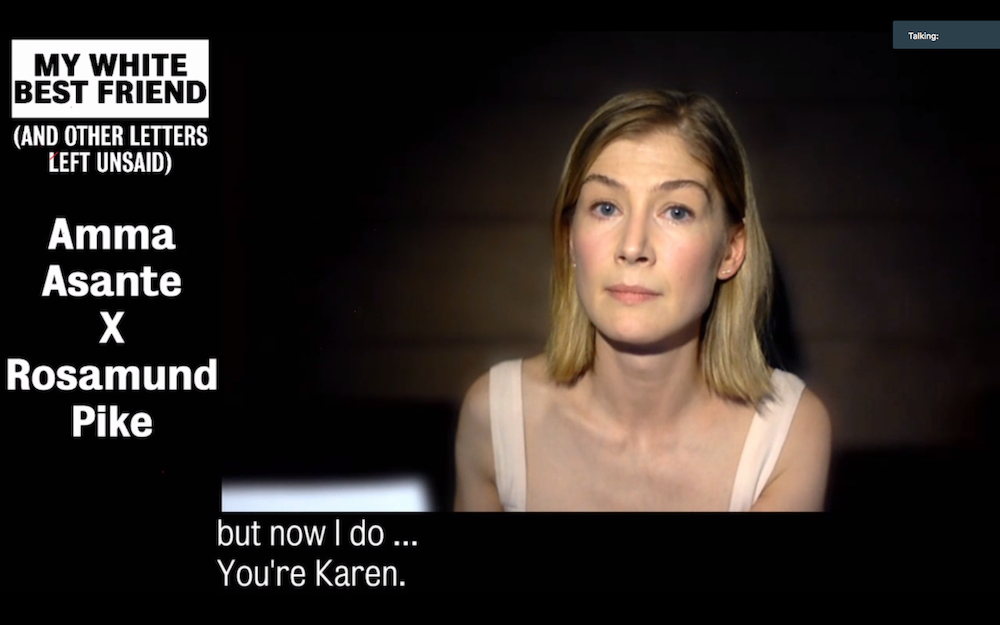 The strength of the response to the re-emergence of the Black Lives Matter campaign has encouraged some theatres to create provocative, new work. Often, the keynote is a personal feeling. One recent example is the Bush Theatre’s The Protest: Black Lives Matter, which mixes extremely personal emotions with formal choices that make it very difficult to review the work as if it was just straight theatre. Now the Royal Court has come up with My White Best Friend (And Other Letters Left Unsaid), curated by playwright Rachel De-Lahay and director Milli Bhatia, an online festival — which took place on 13-17 July — in which 10 black writers say the things they have previously left unsaid, helped by a cast which included Rosamund Pike and Anne-Marie Duff.

The format is intriguing. Every weekday night last week, letters penned by two writers were read out live online, after an introductory letter by De-Lahay, to a zoom audience. The letters are addressed to a variety of people; but all of the actors, who play their recipients, read them out without rehearsal: like the audience, they were experiencing them online for the first time. This method was used systematically, and brilliantly, by Tim Crouch in his 2005 play An Oak Tree, in which a new guest actor every night read the script without rehearsal, and it gives freshness and spontaneity to the performance, as well as allowing plenty of room for things to go wrong–in a good way. It certainly puts the live back into live performance.

As suggested by the title, the common thread is that each letter is about race and articulates feelings and ideas that the writer has never been able to say. The content is exceptionally personal. These are autobiographical cries from the heart. They pulse with pain; they are embarrassing. They are about disappointment as often as anger, desperation as often as score-settling. So although many of the individual incidents of everyday racism that they articulate are familiar — black children being singled out by teachers for mockery or adolescents being stigmatized for the color of their skin — the sheer accumulation of detailed testimony over five nights, totaling some seven hours of online streaming, creates an overwhelmingly moving and powerful experience. At times, it’s almost too much.

Because the material is so personal, it can’t be reviewed as if it’s fiction, so this is more of a conference report. These monologues are pretty raw, and the actors reading them understandably respond in kind: when film-maker Amma Asante gives a catalog of incidents of how white, middle-aged women have put her down, the reader Rosamund Pike often looks hurt and surprised, as any white person might. When trans-film-maker Campbell X gives an epic account of gender fluidity in African traditions, his reader Martina Laird is moved to tears. Both Adelayo Adedayo and Danielle Vitalis become similarly moved when reading the emotive and hard-hitting letters of Rachael Young and Tife Kusoro.

Clint Dyer’s letter, read by Neil Maskell, describes his elation when he heard about the toppling of the statue of Edward Colston in Bristol; and, like several of the participants, including De-Lahay, he lists many of the victims of racist violence here and in the States. The killing of George Floyd is repeatedly mentioned. Ryan Calais Cameron’s letter to his “Uncle T,” voiced by Lucian Msamati, mixes rap poetry with rage and offers a compelling analysis of the “murder of black self-esteem.” Elliot Barnes-Worrell eloquently tells us, via actor Alex Lawther, of the racial inequalities in his relationship with his cousin, his white best childhood friend. As so often, the N-word proves difficult to say out loud — for some of the white actors.

Anne-Marie Duff, wearing glasses in her brisk and business-like reading of Afua Hirsch’s satirical, funny but also moving account of living in “white Wimbledon,” perfectly conveys the “secret shame” of the addressee, a white South African who has a black grannie. Similarly, Sinead Matthews, reading Lettie Precious’s narrative of a woke mother whose love of her black son distracts her from perceiving the feelings of other black people is suitably awkward. Paapa Essiedu, voicing Yasmin Joseph’s energetic letter to a “teenage waste-man,” is empathetic, self-deprecatory, and occasionally amused.

De-Lahay’s letter, which sparked the festival, was read by Inès De Clercq and set the scene each evening by engaging with racial tensions and emotional labor, asking the privileged to step back to allow others some room to breathe. In the intervals between letters being read, DJ DLK provided cool music. Originally, and with different material, part of Black Lives Black Words at the Bush Theatre, followed by two runs at The Bunker Theatre, this version of My White Best Friend (And Other Letters Left Unsaid) is exemplary in its sense of liveness — the glitches of zoom are part of the experience — and its active promotion of a diverse audience for this event. It is generous in feeling, brave in its honesty, and urgent in its politics.

This article was originally posted at www.sierz.co.uk and has been reposted with permission. To read the original article, click here. 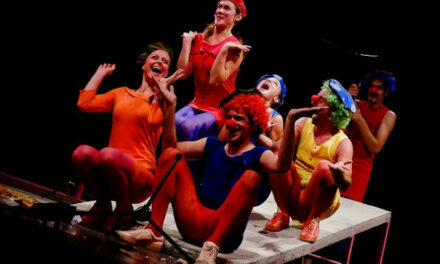 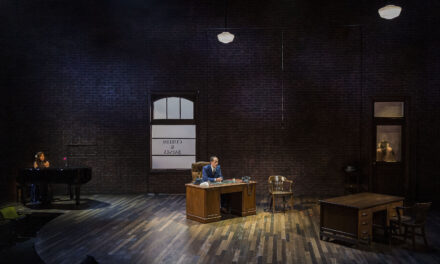