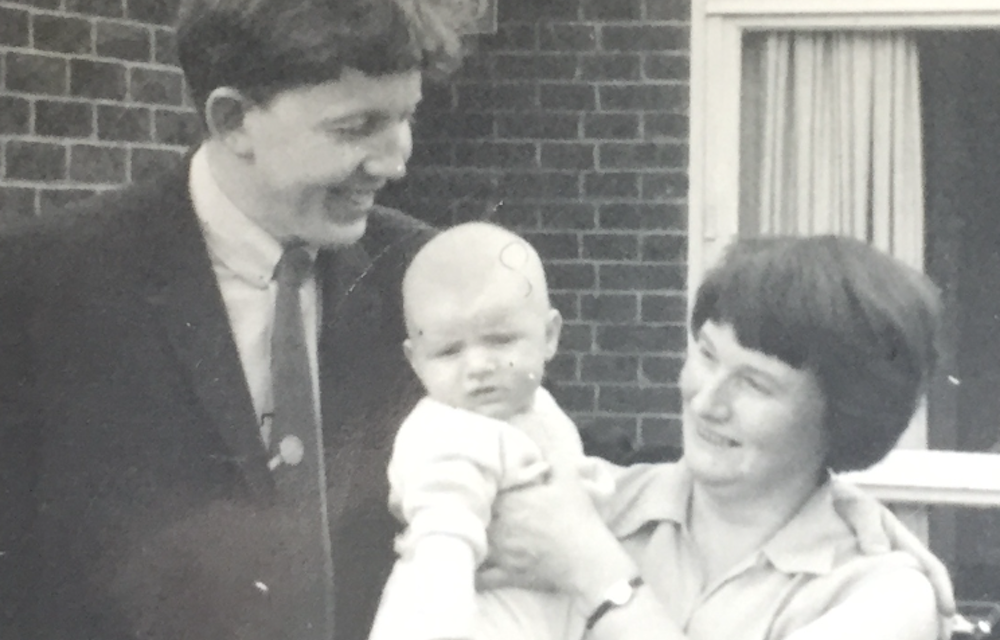 Does a subjective theatre piece encourage a subjective critical response? I think it might, especially when it’s a memory play about dementia, so here goes: First I turn off the lights, then I press play. From the darkness comes jaunty music—it’s a dance class. The teacher says, “We’re not used to having a man in class, are we ladies? But you’re very welcome Mark.” Fade out, but don’t forget: at the age of 50, playwright Mark Ravenhill starts doing a ballet class at the same time as his mum, Angela, is suffering from Alzheimer’s. She’s in her mid-eighties.

Fragments: Mark telephones his mum in hospital, but she doesn’t recognize his voice; in the past, Angela miscarries a baby girl; Angela has a baby boy; Angela’s given name is Rita but, as a child, she thinks it’s too common so she changes it to Angela; Angela is more posh, but her mum calls her Angie, which isn’t; Angela later joins a local am-dram group and is a leading lady; Angela meets a young man called Ted; Angela marries Ted; Angela takes her son Mark to the cinema; they see a film of The Tales of Beatrix Potter, which has dancers from the Royal Ballet, and the little boy falls in love with Jemima Puddle-Duck, afterward dressing up in a bedsheet for wings and yellow cardboard beak while his dad films him dancing. Then he gets a little Woolworths book, How To Be a Ballet Dancer. But he doesn’t actually do ballet until he’s middle-aged.

Don’t forget: Jemima waddles through this piece of sonic theatre, and she’s worried about her eggs. There’s a fox on the prowl and he’s after her eggs. The Beatrix Potter story becomes muddled up with memories of pregnancy, miscarriage, and birth, with the metaphor of the egg reminding us of conception and parturition. And there are lots of eggs. But wait a minute, what’s this? As well as The Tale of Jemima Puddle-Duck, there’s The Wind in the Willows, or — as Angela would say — The Wind in the Soddin’ Willows. Memories of childhood blend into adulthood. Tales of the riverbank turn into details of family life. And the tune of the piper at the gates of dawn softly fades away.

More fragments: the dark gets darker. Angela is hospitalized with dementia and she’s afraid. Very afraid. Who is that stranger? A murderer? Who is that old woman? The atmosphere is soaked in fear. And confusion. And more fear. Why is everyone calling her Rita, when she is actually Angela? Much more confusion. Why has she been sectioned? And what has happened to Ted’s face? It looks like he’s had a cup of boiling water thrown at him — more pain. More darkness. But also some healing.

So don’t forget: there are tender and moving moments here as well as violent ones; there’s loving as well as fear. Must mention that Ravenhill’s writing is full of sketchy impressions, fragmentary and most convincing when most fraught. Must also mention that some of the dialogues sound awkward and that he’s less successful at evoking the 1960s than at creating a sense of fractured memories, and a convincing snapshot of the bewilderment brought on by dementia. But not much plot. Must finally mention that some moments, as when Ted and Mark shut out Angela, are psychologically real. And that nothing feels final.

Don’t forget: an email arrives with an old photograph of Mark Ravenhill playing with a cine camera. It is dated 1971 which means that the playwright was four at the time. Sweet. I also find a press release which says that Angela, a new autobiographical play by Ravenhill, is the first in the opening season of Sound Stage, a new online audio theatre venture, featuring eight plays, from Pitlochry Festival Theatre, the Royal Lyceum Theatre, and Naked Productions. I’m copying and pasting here. I also seem to remember that there was a bit of a fuss when this radio play was announced because, although it is a co-production between two Scottish venues, only two of the 11 main actors are Scottish. That feels a bit wrong, doesn’t it? I mean, doesn’t Scotland have any local talent?

Must also remember to mention that Angela is directed by Polly Thomas and that different actors play older and younger versions of the characters, although Toby Jones plays Ted all the way through. Matti Houghton is young Angela and Pam Ferris is the older Angela, while Jackson Laing is young Mark and Joseph Millson is the older Mark. They create the feeling of time folding in on itself, successfully bringing to life a family in which the son is both wanted and a handful, and a working-class setting where culture in all its forms shapes people’s lives. But let me finish by saying that although streaming theatre is brilliantly liberating—no more train journeys, no more standing around in the cold, no more crushes at the bar, no more smelly toilets—the message that a short digital run like this sends out is all wrong. When a show is only available for a couple of days it makes it exclusive; it denies access to thousands.

This article was originally posted Sierz.co.uk and has been reposted with permission. To read the original article, click here.