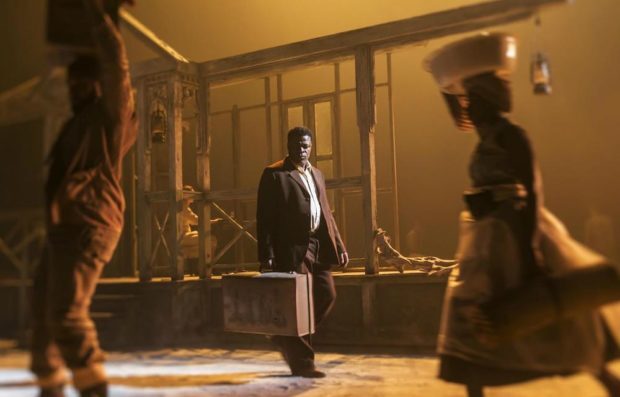 Lorraine Hansberry’s debut, A Raisin in the Sun, was the first drama written by a black woman to be produced on Broadway, where it opened in 1959. It is now an American classic, but it’s her last play, Les Blancs, that in the current context of the Black Lives Matter movement and resistance to institutional racism both in the US and UK feels even more relevant. Showing the clash between the dying colonialist rule of the whites, as indicated in the title, and the rise of African nationalism in an unspecified African country, it has a tremendous resonance and power, especially with a top-notch cast led by Danny Sapani.

The National Theatre’s production, first staged in April 2016 and now streamed as part of its free At Home series, is directed by Yaël Farber in a production that is both visually striking and emotionally strong. The play was unfinished at Hansberry’s death from cancer at the age of 34 in 1965 but was reconstructed by Robert Nemiroff, her former husband and executor, and eventually reached Broadway in 1970. The current version — put together by Joi Gresham, director of the Lorraine Hansberry Literary Trust, Farber, and dramaturg Drew Lichtenberg — is a rewritten text created from Hansberry’s notebooks and her drafts. Its central theme of the white domination of African peoples is not only pertinent but is also represented through a complex collision of culture, religion, and sexuality.

Set in a Christian mission hospital deep in rural Africa, the story focuses on Tshembe Matoseh (Sapani), who returns, leaving his European wife in London, to the village of his birth for the funeral of his father. He is conflicted: on the one hand, the missionaries, such as the blind and elderly Madame Neilson, have educated him and he wants to be loyal to them; on the other, the freedom fighters, such as Peter and Ngago, are calling for him to join the resistance movement. In between, an American liberal journalist Charlie Morris advocates pacifism, while a symbolic nameless Woman offers the hesitating Tshembe the spear of courage. Within Tshembe’s family, there is also tension: his mixed-race brother Eric is gay, and this is read as a threat to the men’s masculinity. Another brother, Abioseh, is a Christian minister.

Hansberry wrote Les Blancs partly as a response to Jean Genet’s The Blacks, in which black actors played white characters in an absurdist play studded with transgressive ideas about racism and sexuality. By contrast, Hansberry’s writing is more emotionally and psychologically realistic, even if some elements of her play, such as Woman, are overtly symbolic. Although this version is quite heavy-handed at the start, with a bit of clunky exposition, the story soon gathers pace, as the colonial police chief Major Rice confronts the violence of revolt with his own brutal retaliation, and the revelations about rape and terrorism arrive with a powerful charge of radical extremism.

Not only is Tshembe conflicted personally, torn between his white wife and child in England and his roots in an African country painfully achieving independence, but his criticism of Morris’s liberal ideas is also perceptive and right: he satirizes the views of the West with sharp accuracy. And while his brother Abioseh advocates a gradual path to independence, Tshembe thinks that Christians are as oppressive as the military. Religion is the soothing conscience of colonialism; missionaries come to the continent for reasons of personal fulfillment. Yet they also do good. Today, these contradictions and ambiguities are more real than ever.

The play’s central message, which Hansberry is too subtle to spell out, is that all Western intervention in the affairs of African results in things becoming worse. The whites are bad news for the blacks. Most troublingly, the play, in this production at least, seems at the end to exalt in the violence of revolutionary terror, which may be understandable from the emotional point of view of the oppressed but feels uncomfortable for those who are less vengeful. Or less in love with the power of spilling blood. I cannot believe that Hansberry really thought that extreme violence would solve anything at all.

Still, Farber’s production has a great, revolving set by Soutra Gilmour, which features a precarious mission house isolated in clouds of incense, and has a hauntingly atmospheric soundscape by Adam Cork, with onstage Xhosa chanting and singing. This combination gives a memorable distinctiveness to the location, making concrete what might otherwise be abstract. As Tshembe, Sapani gives one of those towering muscular performances that combine intellectual subtlety with emotional intelligence. He allows us not only to see but also to feel his character’s contradictions. At times, he is passion incarnate. And he’s well complemented by Siân Phillips as Neilson, Tunji Kasim as Eric, Gary Beadle as Abioseh, Sheila Atim as Woman, Elliot Cowan as Morris and Clive Francis as Major Rice.

This archive recording is quite crude, but the production somehow shines through. If it’s hard to do justice in one review to Hansberry’s bold and complex drama, which includes the character Peter (Sidney Cole) who is both a faithful servant and an insurrectionist, and Western doctors such as Marta (Anna Madeley) and Willy (James Fleet), this version gives a panoramic sense of an expansive continent which contains the riches over which each faction is fighting. As Atim’s Woman circles the action, it is clear that no glib phrase can accurately summarise Africa’s long and brutal relationship with Les Blancs. Hansberry well understood this and, however imperfect, her final play is a powerful testament that fully embraces both past and present.

This article was originally posted at Sierz.co.uk on July 6th, 2020, and has been reposted with permission. To read the original article, click here. 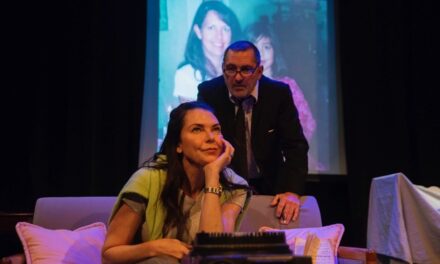 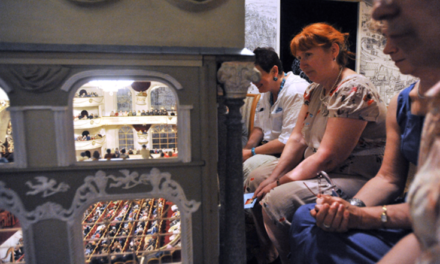