Exploring and Humanizing the Nuances of Black American History Through Theatre: Conversation With Playwright and Actor Stephen Sampson. 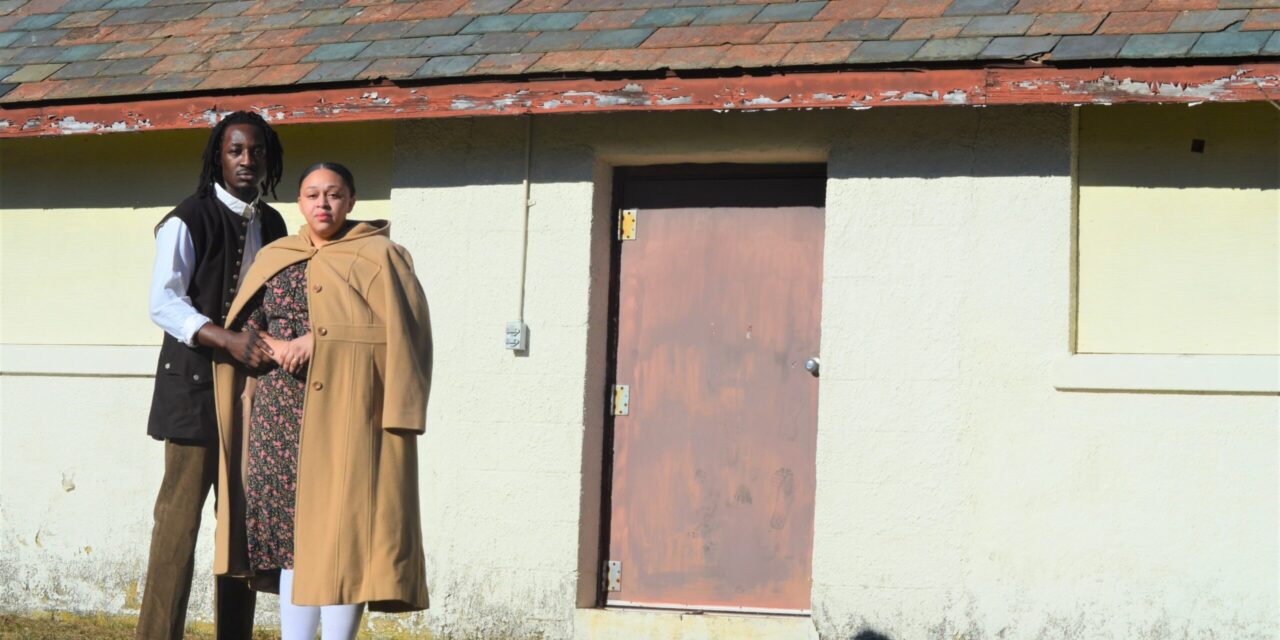 Driven by his appreciation for  authenticity and history, Stephen Sampson created his theatre company Greater Joy Productions to explore the power of original storytelling. In his play The Toby Gilmore Story, Stephen offers an artistic exploration of a historical figure whose unique life story embodies the controversial complexities of Black American identity during the revolutionary war.  Live performances of The Toby Gilmore Story are set take place at the Old Colony Museum in Taunton, Massachusetts, on February 20th 2021, with live streams of each performance available as well. In this interview with The Theatre Times, Stephen shares his thoughts on having difficult conversations about American history and Black experience through theatre.

Irina Yakubovskaya: How did you become a playwright?

Stephen Sampson: As a young school kid I was very restless. My elementary school teachers always said that I moved around like I had ants in my pants. So, in third grade, I wrote a book called “Ants in my Pants.” The teachers started talking about it and encouraged me to write more. When I got into theatre, I was around 13 years old, I joined a program for youth in the urban part of Boston. I wanted to tell stories, so I started writing plays.

IY: As an adult, why did you choose to keep investing your talent and skills in the local Boston theatre community?

SS: I am an actor as well as a playwright. When I was getting ready to graduate from Emerson College, my fellow students would ask whether I was going to go to LA or NYC [like most people]. I believe that grass is greener on the other side, but in my mind, somebody had planted that grass and made it green. That is why I wanted to stay in Boston and do theatre here. I also feel like something is happening in Boston, there is a buzz happening in theatre. A lot of people in the urban parts of Boston haven’t had a lot of exposure to the theatre in schools to even have the interest to pursue it [as a career]. I don’t want to leave Boston; I see how much local talent is here and [this talent] can be used in the theatre world to make it better. There is a lot of potential here.

IY: What inspired you to write The Toby Gilmore Story?

SS: For many years, I volunteered with elementary schools in Taunton, I spoke to each grade level about one Black historical figure for about thirty minutes. I would do almost a theatrical presentation for each grade level. Last year, someone from the museum came spoke to me and my wife, and we ended up going to the museum in Taunton and learning about different stories. The Toby Gilmore story stuck out to me. It had a mystery, and it felt very uncommon. I decided to write a play inspired by it. The play is about the Black soldier Toby who lived in the Taunton area in Massachusetts. He was the only slave of a family, the Gilmore family. He was supposed to go to Virginia, but a storm made him go to a slave port in Rhode Island. A lot of folks don’t know that there was slavery in the North: Faneuil Hall [in Boston] was a slave auction house, and there was a slave port in Rhode Island. This particular black man, Toby, was supposed to be sold in Virginia but ended up in Rhode Island. He was bought by captain Gilmore, becoming his only slave. Captain Gilmore had twelve children, and Toby was taking care of the house and family, the captain would leave often. George Washington said that black men could enlist [to the army] if they were free. We don’t actually know what happened historically, but something happened after Washington’s order went out, and Toby got free, so he was allowed to fight in the war. Either he asked for freedom and his master granted it to him, or something else happened there. Toby enlisted in the same platoon as his master’s son so there could have been some kind of deal, maybe Gilmore wanted Toby to keep an eye on his son. Whatever it was, Toby was able to join the army. He eventually became a hero. He was a cannoneer in the army. George Washington let soldiers keep their weapons, so for years after the war, every Fourth of July Toby would go to the downtown area in Taunton and fire his canon. He would fire the canon thirteen times for the colonies, and one time for George Washington. They have the canon at the museum now. Toby started out as a slave from Africa, a property, and ended up being such a respected man in town, all in a time when it was very unlikely. I am interested in these local Black histories. Toby’s story is a strong American but also a human story. He could have been in Virginia, one of the worst slaveholding states ever, but he ended up in Rhode Island and ultimately made a name for himself.

IY: Why did you choose theatre as a medium for this particular story?

SS: When I think about the story, I think about how little is known about this man. His wife was this amazing woman named Roseanna. What is known about them is a bullet-point storyline that pretty much is the dramatic structure. He was born, various events happened, but we don’t quite know how these things happened. All we have is a dramatic structure. I wanted to fill in the blanks. I am taking quite an artistic license in how I am writing this show, but it is a historically accurate artistic license.

IY: It is both artistic license but also your insight as an artist and an interpreter of history. It is authentic even if it is imagined.

SS: Representation is important to me because of perspective. There are pieces of stories that only the person inside those experiences could speak to. There are certain pieces to a heartbreak that you can only see from the inside. If you look at a black struggle in America, of course, we have a different perspective being inside of it. This is my skin, and this is the skin I’m in, this is my experience. What is important to me is that there is a part of slavery that people don’t want to deal with. It is the contentment that a lot of slaves had. It is an uncomfortable thing because it breaks into the humanity of slavery. We had people living in closed quarters with white people, with slave masters, and there were these relationships. Some were super toxic; in some cases, there were masters who wanted to love their slaves more, but socially it was not acceptable. How do you live in a world that you don’t agree with? No situation was the same. There were some slaves who were upset that slavery ended. Toby Gilmore was the only slave [in the family], and there had to be some sort of maybe friendship or love, he was living with them watching all their children grow up. In my play, I wanted to explore these connections. Toby was almost like a black son in this family, a caregiver to the children in times when his master was absent. These are the perspectives I am trying to uncover.

IY: How do you address the potential perception of your work as revisiting harmful stereotypes?

SS: Education is very important. Unfortunately, with certain topics, because they are so personal you see tempers go up quickly before conversations can happen. We need to continue to find spaces to have conversations. There is more than one way to fight racism. We can be upset at professors and bring it up to the administration, and that is one way. But in a house, at Thanksgiving, there is an uncle who says something that is a little off. And at that moment, what is your response? This is the racism fight that I like more than bringing it to the government. A lot of people who march or protest won’t say anything to their uncle. You mentioned stereotypical characters. The way I learned theatre prior to college was from older Black folks in Boston. They would say things like “You gotta feel it, baby, you gotta feel it.” My favorite mentor to this day, a Black woman, has done a play where she’s performed in blackface. We have had these conversations. The culture in which these Black actors [who played stereotypes] went through the pain and the shame, they now get made fun of, people call then Uncle Tom, or coon, their name gets desecrated because it is used to make fun of other black people. These Black folks were paving the way for the Black actors and actresses who might have not had the chance otherwise. Omitting them is erasing Black history. We have to look at the whole Black story, not only the parts that the media encourages so that we can open up the narrative. There is so much in it: the good, the bad, the terrible, and the ugly, but there is also some beauty of humanity in it. I like to look at the whole thing. It is easy for us to say that the founding fathers were evil because they owned slaves. But what do we do when we unpack these stories? The more human we get with them, the more we are naturally able to let go of some racist ideology.

IY: What is the dream life you envision for this play?

SS: In a full fantasy world, my dream is that this story would give people who see it a “huh” moment, a shift in how we think about slavery, and what America means to a Black person. That is what I want people to get from this story. Toby Gilmore was a slave, and you can explain his going to war because he wanted to be free. Something happened and he [subsequently] chose to honor not only the colonies, but George Washington, and in a time when to be Black was to be synonymous to being anti-American. I would like for people to wonder there could be something else to this. As a playwright, I try to have no opinion, I just try to tell the story. If it was my opinion, I would have written Toby riding away on a horse towards freedom. But I am trying to be honest with the actual story. I want to see this story live in Taunton, and then see it live again, have a life beyond this production.