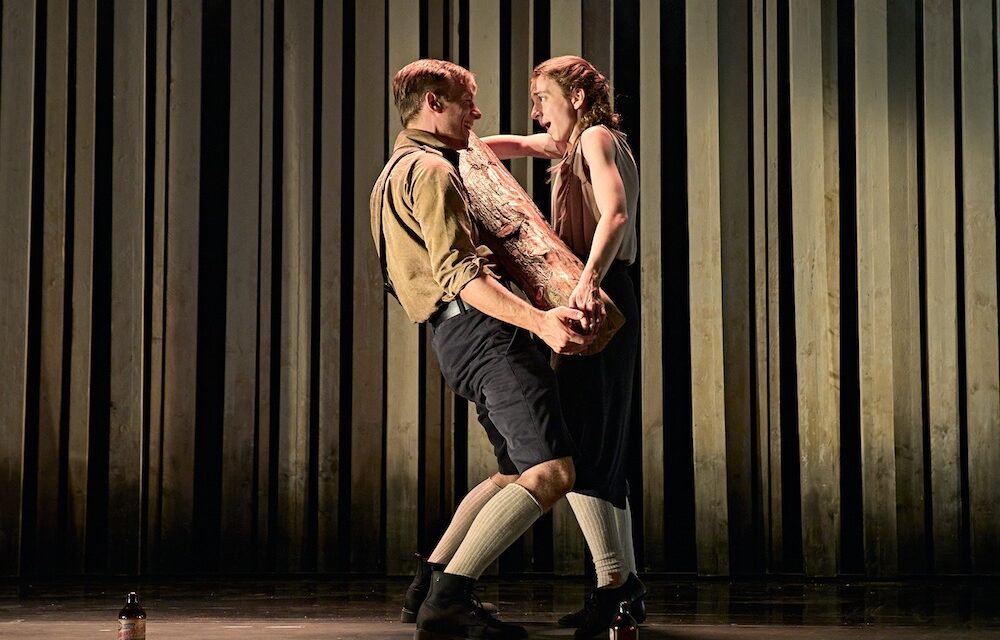 Are we too obsessed with Nazism? Apart from countless television programs which revisit that grim era, as fact or as fiction, in monochrome or in color, briefly or at length, there has recently been a fistful of plays in London about those evil times — including Paula Vogel’s Indecent (2015), Josh Azouz’s Once Upon A Time in Nazi Occupied Tunisia (2021), and Tom Stoppard’s Leopoldstadt (2020). What distinguishes many of these new plays is the originality of their vision. For traditionalists, John Kander and Fred Ebb’s Cabaret (1966), which is coming to the West End with Eddie Redmayne and Jessie Buckley. This is the context for young American playwright Bess Wohl’s brilliantly original Camp Siegfried, which gets an excellent production at the Old Vic.

Inspired by the real Camp Siegfried, an exclusive summer retreat for American youth of German descent on New York’s Long Island in the 1930s, Wohl’s two-hander takes place in 1938. While Hitler is enjoying mass adulation in Germany, two American teenagers — 17-year-old Him and 16-year-old Her — meet at summer camp. At first she is excruciatingly awkward and gawky, while he is confident and sociable. She is more a bookish type, and is doing well in her German lessons, while he is more outdoorsy, as he demonstrates in the scene where he chops wood and flexes his muscles. But while he loves nature and midnight hikes through the forest, she hates insects and keeps getting her legs scratched by thorns.

Beginning with their first uncertain meeting while an oom-pah band drowns out their voices, the play shows how the camp’s mission is to promote “German values”, countering American skepticism and trying to present Hitler as a modernizer and anti-Communist. At first the preaching of Nazi ideology, which is also embodied in place names such as Hitler Street, is concealed in injunctions such as “be social”, but the open-air fanaticism soon conveys another message: men must be men, and women must have babies — it’s for the good of the master race. Yet neither teen has much experience of love, although she reveals some disturbing past experiences at school and he has to confront his tendency to anger which gradually convinces him that he is, at heart, a killer.

For the most part, Wohl tells their story, which moves from the glow of idealism to hurtful reality, with great originality and charm. Despite the occasional moment when things are underlined too much, she writes with a very attractive sense of empathy, which encourages us to identity with these two teens, while slowly realizing not only the horror of what they stand for, but also its resonances for us today. The chilling way in which these youngsters readily believe in their community’s ideology, using it as a plank on which to build their self identity, and the easiness of their radicalization, has recognizable similarities with current anxieties about Islamist and far-right true believers. But also for anyone who wants radical change — revolution. At one point, with an overt nod to the present, these German Americans agree that “I am sure America can be great again”.

Wohl’s imaginative vision is conveyed through a series of scenes which exemplify her confident theatricality, and her understanding of metaphor: at one point the sound of fireworks suggest the coming of the second world war; at another, the flashing of torches at midnight reminds us of the night-time rallies of Nazi Germany. The moon and the sea symbolize the depth of emotion, although love’s sudden arrival is easily dissipated and illusion soon turns into disillusion. Speech after speech communicates a tender feeling of young desire, its impetuousness and absolutism, and then speech after speech turns into full-blooded truth telling. She captures perfectly how the adolescent search for self-definition can grasp for support at vile ideas, such as anti-Semitism.

Both Her and Him describe the feeling of either being murderous or of seeing a vision of a Hitlerian Fatherland in explicitly disturbing terms. If Her journey from a fanatical embrace of Nazism to disillusion, thanks to meeting a kind New York Jewish doctor and his family, might not convince everyone, Katy Rudd’s production, on designer Rosanna Vize’s minimalist set, is thrilling to watch. Against a backdrop of videos by Tal Rozner, which sporadically show footage from the historical camp, Patsy Ferran and Luke Thallon perform with superb control, giving detailed readings of their characters. The way they gradually swap psychological positions, as she gets more confident and he gets more awkward, is excellently accomplished. Camp Siegfried is a victorious drama.

Camp Siegfried is at the Old Vic until 30 October. 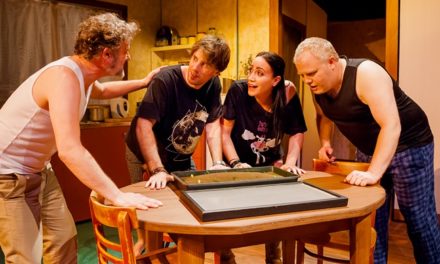