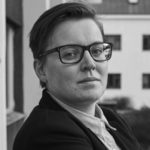 Sigridur Jonsdottir is the lead theatre critic at Frettabladid, Iceland’s most widely read daily newspaper, in addition to being a freelance writer, translator and editor. She is a graduate of Li Po Chun United World College of Hong Kong, recieved a MA in Social Anthropology from the University of Edinburgh and a BA in Theatre and Performance Making from the Icelandic Academy of the Arts. At present she is pursuing a MA in Anthropology with a focus on theatre from the University of Iceland, where she has lectured on queer theatre. Her radio play, A Woman Vanishes, was broadcast by the Icelandic National Broadcasting Service and she is currently writing her second.

In his 1991 book Roman Theatre And Its Audience, Richard C. Beacham forms the theory that the...

The economic crisis in Iceland was messy, merciless and brought an entire nation completely...

“If one is to rule, and to continue ruling, one must be able to dislocate the sense of reality.”...

The Icelandic theatre season is about to come out of hibernation, where theatres close for the...

Suðureyri, a small fishing village found in a fjord at the northern tip of the Icelandic...