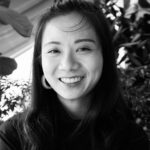 Rou Chua is an actor, writer, and reviewer, who is currently based in London to complete a Masters in Comparative Literature at University College London. In the last decade, she has been in an original theatre-dance production at the National University of Singapore, and more recently in 2019, she was part of a 17-men ensemble in the conceptualization and production of Alice Birch’s feminist play, "Revolt. She Said. Revolt Again." at the Bloomsbury Theatre. Currently, her focus has been on reviewing plays and films, with her most recent participation at the premiere of the documentary "Fighting for a City" at the London Lift-Off Film Festival 2019.