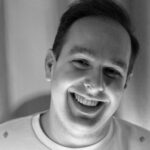 Joseph Burdi is a Toronto-based Dramaturg, Director, Producer, and Artistic Director of Fly The Nest Productions (@flythenestproductions). He is a graduate of York University’s Theatre Studies Program with a specialization in Dramaturgy and Devised Theatre. Having worked across Toronto and internationally, his work is inspired by political-socioeconomic issues and justice, exploring substantial risks in content, form, and presentation through a queer aesthetic as well as a focus on character study and image work. He is currently the assistant director for Litmus Theatre’s upcoming production of Wendy, mentoring under Matthew Thomas Walker, and is producing Fly the Nest Productions’ first project, an interactive work of theatre. Past credits include Director for Homo For Christmas (2019) at the Inspirato Festival, Midnight Rubes (2015) at Social Capital Theatre as part of the inaugural Short Short Play Festival and Chaperone Blues (2014) and A Nondenominational Holiday Party for the Lonely (2104) at Unit 102 as part of Operation 24, Assistant Director and Dramaturg for High School Symphony (2018), and Dramaturg for My Korean American Friend (2018), Jennaration Y (2017) at the Edinburgh International Fringe, The Ashley Plays (2017), Telling Tales Out of School (2016-17), and The Lost City of Alanis (2016).