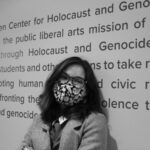 Allison Newey is a third-year student at Keene State College majoring in Holocaust & Genocide Studies and Political Science and minoring in Theatre and International Studies. She has a love for writing and research, as well as a deep appreciation for the theatre and performing arts. She has performed, directed, and collaborated on several shows in greater Boston and the northeastern United States. She is Kennedy Center American College Theatre Festival nominee and was recently invited to perform for her performance of Cathy Hiatt in The Last Five Years at Keene State College. Some of her interests include musical theatre, dramaturgy, theatre and social issues, transcultural theatre, and historical theatre.