Sending the Spectator Abroad: Some Reflections on Theatre Translation 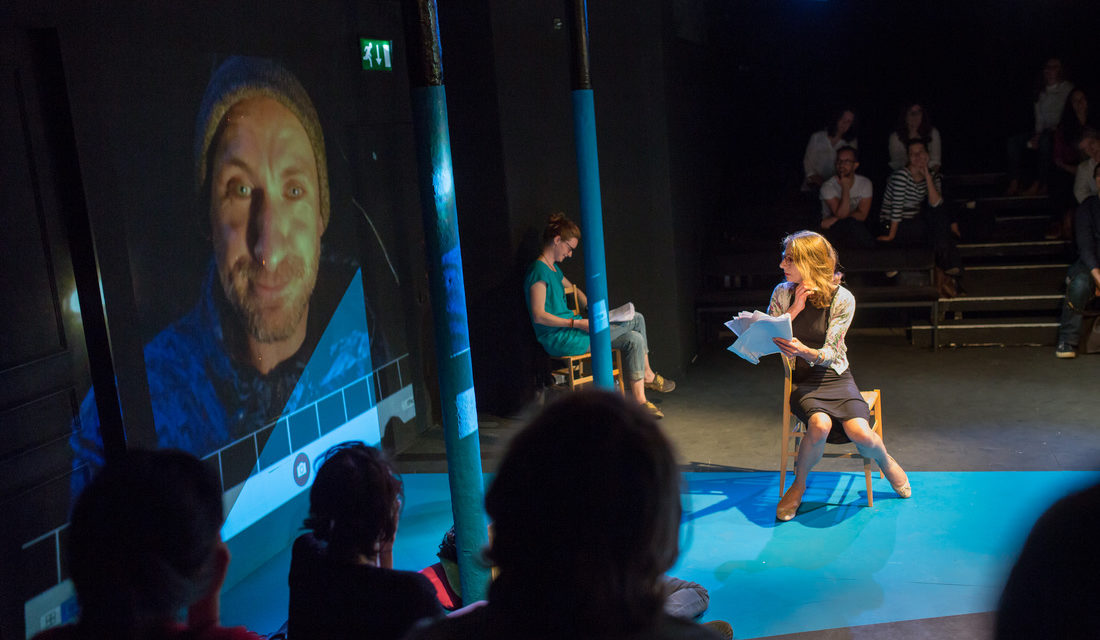 Rehearsal and the reading of Denise Despeyroux's "Black Tenderness," translated by Simon Breden and directed by Tara Robinson with Will Irvine, Caroline Wildi and Steffan Donnelly. Sound design by Steve Potter and set and costume by Cécile Trémolières. Photo credit Jamie Smith.

How does the work of translation affect how we read, understand and spectate? How do translations of dramatic texts influence performance and mise en scène? How might a theatre translation undermine or reinforce a linguistic or cultural worldview? These are some of the questions posed by Margherita Laera’s research project Translation, Adaptation, Otherness [www.translatingtheatre.com], a two-year fellowship funded by the UK Arts and Humanities Research Council and hosted by the University of Kent. The project seeks to challenge dominant views about good practice in the translation of theatrical texts, especially into English; in particular, it addresses the ideological infrastructure of translation and its consequences, weighing up how in a theatre world – such as the UK’s – riddled with creative adaptations, ‘based on’ works and remakes, the translator might still have a radical role to play in making sure that a text’s difference is preserved, taken into question and used creatively.

The first stage of the project used practice-as-research methodologies to investigate theatre’s inherent potential to create other worlds vis-à-vis translation’s seldom-exploited capacity to do the same. In making the unfamiliar familiar and the inaccessible accessible, translation has a tendency to flatten cultural difference: a ‘good translation’ is one in which a text is rendered accessible and familiar, fluent and recognizable. Most translations on the British stage do just this, to the extent that they often become rewrites or adaptations where the source culture disappears and texts are absorbed wholly into the horizons and expectations of the receiving environment. But what if we started to see translation as an opportunity to send spectators on a journey abroad, rather than kept ‘prisoners’ of their own horizons? And what if the translator’s task was regarded as that of working creatively with difference in order to highlight it, instead of actively removing it from public view?

The project’s first step was to select three contemporary plays from the UK’s most widely-spoken European languages (French, Polish, and Spanish), to workshop them and produce staged readings at the Gate Theatre, Notting Hill, London, in the summer of 2016. The plays were translated by three scholar-translators who were specifically asked to resist over-domestication of difference. The project then moved to a practice-as-research rehearsal process with theatre professionals, exploring how this kind of desired effect – to send the spectator abroad – would alter performance and staging in conjunction with the text. The choice of plays was crucial, as every effort was made to select texts that would challenge the mainstream genre and style norms of British theatre as well as generally held assumptions about what should be translated, and not only how. The selected works – written by migrant or second-generation authors who have complex relationships with their respective countries, cultures and languages –  also challenge the idea that a text written in a specific language should stand in for categories of nationhood: the selected texts largely disrupt texts essentialist ideas of theatre cultures and playwriting in Spain, France, and Poland, because they do not conform to the norms set up by the (small) corpus of plays translated from those source languages and staged in London.

Simon Breden, Lecturer at the University of Nottingham, translated Denise Despeyroux’s Black Tenderness: the Passion of Mary Stuart from Spanish for the project. As a magical realist comedy written by an emerging female writer, the play significantly challenged expectations around ‘Spanish plays in translation’ conventionally staged in London. These are generally serious Golden Age dramas by canonical male writers such as Calderón de la Barca and Tirso de Molina, or texts by García Lorca, often heavily adapted into contemporary standard English. Breden set himself the task to produce a text that would ‘remind the audience at all times that they are hearing a translation of a play that comes from a different, albeit recognizable, Western culture’ (Breden in Despeyroux, 2017). In practical terms, this involved ‘retaining the Latinate syntax drawn straight from the Spanish, creating a much more “wordy” stage translation than we would be used to in the English language’, in the belief that smoother, more fluent translations often betray the patterns by which thought organises itself in a particular language. ‘If we changed the way the sentence is structured’, Breden continues, ‘then we would change the way the character thinks and organizes their thought in a particular way, starving actors of what they need: motivations to build their characters’ idiosyncrasies on stage’ (Ibid.). In fact, the practice-as-research phase of the project illuminated how Stanislavskian undertakings – such as singling out character motivations – were disturbed by the ‘foreignising’ translation, as were attempts at overacting or at working with stock characters. In what the performers termed ‘translation-land’, characters appeared complex and difficult to pin down: their tropes, mannerisms, and intentions didn’t seem to map onto either ‘reality’ nor fiction as such.

The project’s second text, Marie NDiaye’s The Snakes (originally in French), also contrasts with a series of assumed audience expectations: it has a plot that resists any idea of narrative progression, devolving all action to a terse, enigmatic and highly symbolic language; it dispenses clues that it doesn’t follow up on, consistently doing and undoing the rules of its own game, granting very little satisfaction to the spectator who likes to see where the story’s going.

Its translator, Kélina Gotman of King’s College London, describes The Snakes as ‘a difficult play: brutally stark, enigmatic. It repels the reader with its clean, nearly impermeable lines; with the complexities, it appears never to reveal, yet which it nudges out to the surface of the play like taunts’ (Gotman in NDiaye, 2017). In translation, which Gotman agrees is ‘often a conservative project’, her objective was thus to preserve the play’s abstracted, suspended, ‘under glass’ quality without falling for English’s seemingly inexorable tendency to explain, to fix, to anchor in the real:  ‘the greatest challenge facing a translator into English’, she writes, is ‘not to succumb to the tendency in English to render literal what resists it’ (Ibid). Gotman’s endeavor to reproduce NDiaye’s capacity to disorient the reader/spectator also proved to supply some of the practice-as-research rehearsal room’s greatest difficulties. Where director Daniel Goldman sometimes sought to absorb the play’s more opaque passages into a recognizable world, pinning certain idiosyncrasies onto concrete details – about class, about psychology, about social status – the play itself resisted any kind of ‘taming’. The translated text, Gotman writes, is written in ‘an English that seems odd, uncomfortable, nearly stilted. But, surprise! The French do this too’ (Ibid.). As an audience member stated in feedback, ‘it sounded alien, but I was asking myself if it was linguistically or conceptually alien’. The truth, of course, is that it’s both.

Aneta Mancewicz and Bryce Lease, Lecturers at Kingston and Royal Holloway Universities respectively, write in the introduction to their translation of Piotr Peter Lachmann’s Gliwice Hamlet that in approaching the text as translators, they were always ‘invested in Lachmann’s project, which is never at home with itself. The play is already “foreign” to audiences in Poland’ (Lease and Mancewicz in Lachmann, 2017). Lachmann’s text is foreign to itself because it deals with displacement and with the frailty of cultural identity; it is also foreign to itself as a play, as it is a palimpsest of fragmented scenes that was never imagined as a play to be performed by others, and certainly not in other languages. Moving through the 20th century via lyrical word associations, local historical references, multilingual word games and ‘mnemopathic’ flashbacks, Lachmann wraps his own autobiography as first a German and then a Pole (his German city of Gleiwitz became Polish Gliwice in 1945 following the Potsdam agreements) through the story of Hamlet and through the conceptual apparatus of theatre as a medium: doubling, performing, reflecting are all central themes. In this context, the act of translation becomes also about the transposition of experience into theatre, of one identity into another, of the past into a recalling in the present. Lachmann’s story, as Mancewicz and Lease note, ‘represents a striking case of cultural dislocation: the experience of becoming a foreigner at home, where familiar words and places are overwritten, renamed, known differently’ (Ibid.).

Displacement, disorientation and the lack of a ‘map’ are conditions the theatre knows well: the theatre can be a foreign country, and much theatre – perhaps the best theatre – revels in its intrinsic possibilities as a place of ‘otherness’. The question is whether theatre in translation can take advantage of such a range of potentialities and what would be gained from exploiting the otherness of theatre in translation fully: what is the ethical effect of sending the spectator abroad? When the lights go up, what will remain of that travelling?

The three plays will be published by in 2017 by Cue Press and will be available as e-books and print-on-demand.

This post was written by Margherita Laera and Flora Pitrolo. 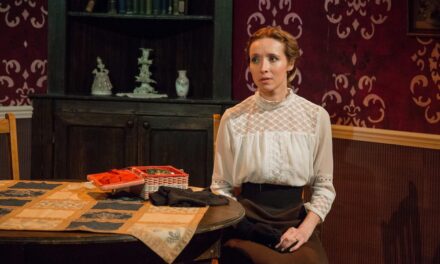